How Do You Upgrade OpenSSL in Your Software Stack? — SBOM and OBOM assisted software upgrade

The OpenSSL project has rolled out fixes to contain two high-severity flaws in its widely used cryptography library that could result in a denial-of-service (DoS) and remote code execution. But are you confident to pinpoint the applications that are using outdated OpenSSL libraries in your software stack?

Before answering the question, let's review the applications using OpenSSL. What are they? How do they link to the OpenSSL library?

In general, there are two categories of such applications: 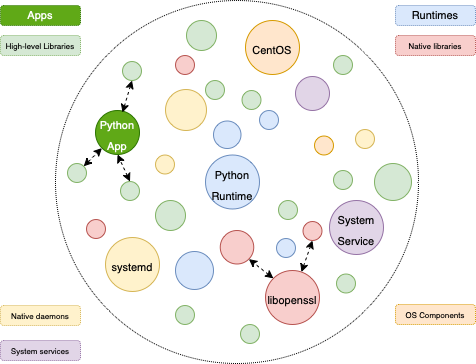 As shown in Figure 1, a Software Bill of Materials (SBOM) is a formal record containing the details and supply chain relationships of various components used in building software. For example, the SBOM (shown in the figure) contains the version and vulnerability information of the OpenSSL library. Deepbits Technology uses cutting-edge AI-powered technologies to identify software components and report SBOM information. Guided by the SBOM information, the information security practitioners upgrade the OpenSSL library accordingly.

However, SBOM doesn't capture the runtime environments of the target, including runtimes, native libraries, containers, system services, configurations, operating systems, and additional dependencies. The missing of such information creates a disconnection between different software layers (e.g. between application and operation system).

The SBOM-assisted upgrade is therefore facing below challenges:

Operation Bill of Materials (OBOM) is a formal model to connect different layers of the software system and capture the knowledge of runtime environments. An OBOM details the components, dependencies, and other metadata for software in production.

Deepbits Technology uses dynamic analysis technique to gather the OBOM information. After the application is loaded and run, the dynamic analysis tool monitors the execution traces and system status changes to infer the dependencies between software components.

Figure 2: Dynamic analysis of software to figure out OBOM

The above code snippet shows a simple Python application that performs simple encryption/decryption by invoking the cryptograph library. Deepbits Technology extracts the information of active components and dependencies between them (visualized in Figure 3). Guided by the information, the security practitioners can easily pinpoint the vulnerable cryptograph native library (libcrypto) that is being actively used by the application.

Figure 3: Example: The components dependencies of a simple python application

Combined SBOM and OBOM, we can get a complete and accurate dependency information on different software components. 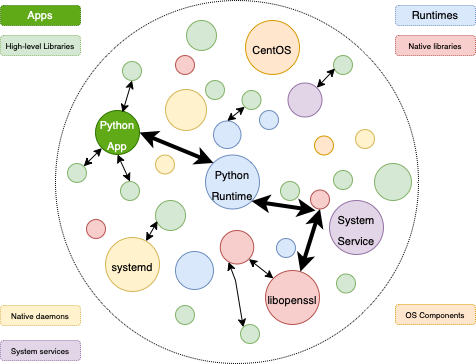